In January 2000, the San Diego Aerospace Museum, California (in downtown Balboa Park) proudly added it's newest and only Army aircraft exhibit to their Pavilion of Flight courtyard displays.  The U.S. Army Cobra Attack AH-1S (ECAS) helicopter was donated to the museum over ten years ago by the U.S. Army Aviation Command in St. Louis, Missouri.  During the past ten years, many hundreds of hours of volunteer time went into the complete restoration of the helicopter.  The helicopter sits atop a pole, with the fuselage angled slightly downward, reminiscent of the gun runs of the past.  The main rotor blade even spins (less than 6 revolutions a minute), but still allows the imagination to wonder how these Cobra pilots could land in such tight confined areas without damaging the aircraft.  The main rotor is 48 feet wide.  This helicopter was a real beast during it's time, and shot 20mm ammo through the turret gun.  It also could carry in various combinations up to 72 - 19mm Folding Fin Aerial Rockets (FFAR) or 8 TOW (Tube-launched, Optically-sighted, Wire-guided) missiles. And of course, night, haze, or fog, was never an obstacle due to the incredible capabilities of the M65/C-NITE FLIR (Forward-looking Infrared) Night Sight. 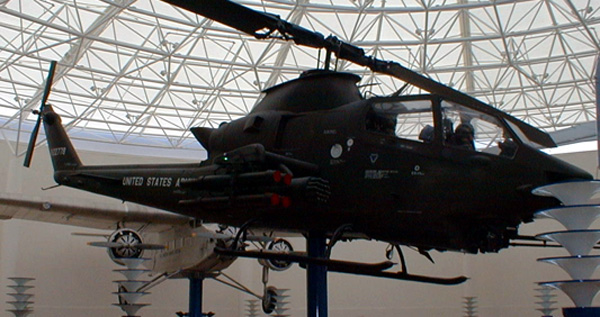 Port Side - You can see the Tow missiles, TOW launchers, and rocket pods.  Also, you can see the "toilet-bowl" exhaust scoop, instead of the IR Suppressor exhaust found on the  later "F" series.  Also missing on this series is the ALQ-144 IR Jammer, found directly on the top housing behind the mast.

Starboard  Side - You can see the tail rotor,  fuel port and the main rotor turned 90/270 degrees as it rotates counter- clockwise. 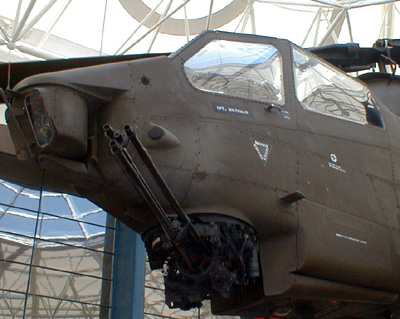 Although it's a bit hard to see in the left photo, my name "CPT BOLTRALIK" is stenciled beneath the Co-Pilot / Gunner station door (above the green arrow) ..... for all to see and wonder who I was.  I am deeply honored to have served my country as a U.S. Army Senior Aviator.

As any helicopter pilot will tell you, flying a helicopter is a skill that takes many years to master.  But once it is mastered, helicopter flight is a thing of real beauty, with total 360 degree maneuverability.